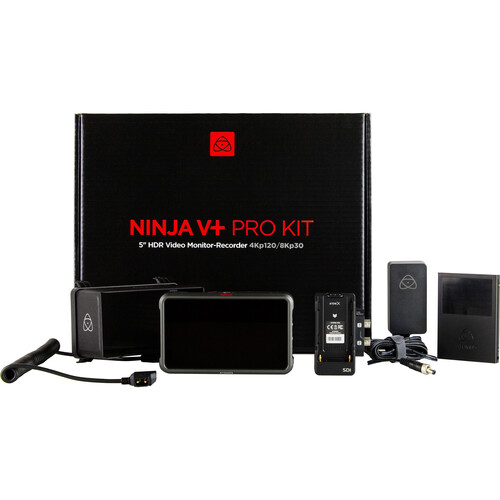 Expand your on-camera monitoring and recording options all the way up to 8K30 and 4K120 ProRes raw with the flexible Ninja V+ 8K HDMI/SDI Monitor/Recorder Pro Kit from Atomos. Designed to bridge the gap between mirrorless and cine-style cameras, this kit pairs the latest 5.2" Ninja V+ 8K HDMI recording monitor with an AtomX SDI module, a free-to-download H.265 codec license, and a pre-activated SDI raw key. Designed to offer multiple recording options for both HDMI-output mirrorless cameras and SDI-output cine-style cameras, this bundle will keep pace with your choice of the latest cameras for each job you take on.

This kit's AtomX SDI module adds two 12-SDI ports to the Ninja V monitor's HDMI output, offering the flexibility of up to three simultaneous video outputs. The SDI raw license enables support of up to 8K ProRes raw video via both the HDMI and SDI outputs, as well as up to DCI 4K120 ProRes. Cross conversion options include HDMI raw to SDI output and the ability to crop and down-convert DCI and UHD 4K for compatibility with EVFs and wireless video transmitters/receivers without adding other converters. A sun hood, battery eliminator, a power adapter, a locking D-Tap power cable, and a hard case round out this handy kit.

If you're shooting with an 8K camera, then why not record in 8K raw format using the Ninja V+ 5.2" 8K HDMI H.265 Raw Recording Monitor from Atomos. The Ninja V+ is the same on-camera monitor/recorder as its predecessor the Ninja V 5", but the Ninja+ now features a 5.2" display and records and plays back up to 8K raw video to and from purpose-built mini-SSDs.

The Ninja V+ can record Apple ProRes raw up to 8K30 or DCI 4K120 directly from the sensor, and it is compatible with select cameras such as the Canon R5. It also includes a H.265 free-to-download license to record with the high-quality, low-bandwidth codec for up to 10-bit recording in ProRes 4:2:2. Display features include a 10-bit screen with a brightness of 1000 cd/m² AtomHDR technology for accurate monitoring of your log gamma footage, and support for popular log formats from Sony, ARRI, Canon, JVC, Panasonic, Nikon, RED, Sony, and Z CAM cameras.

New in the Ninja V+

The Ninja V+ features a 5.2" IPS LCD screen that is illuminated by a bright 1000 cd/m² LED backlight, making it possible to view in daylight without requiring a hood. Plus, the screen is also color-calibrated from the factory to ensure accurate image representation.

Recording Codecs Including Raw over HDMI

Compatible with virtually any HDMI source including cameras from:

Record 8K30 or DCI/UHD 4K ProRes raw at rates up to 120 fps, including 24 and 25 fps for a more filmlike aesthetic. All recordings are stored as high-quality Apple ProRes or Avid DNxHR files with 10-bit 4:2:2 chroma subsampling. A variety of bit rates are available to fit your project and storage needs.

Atomos Connect 4K for HDMI to USB conversion for