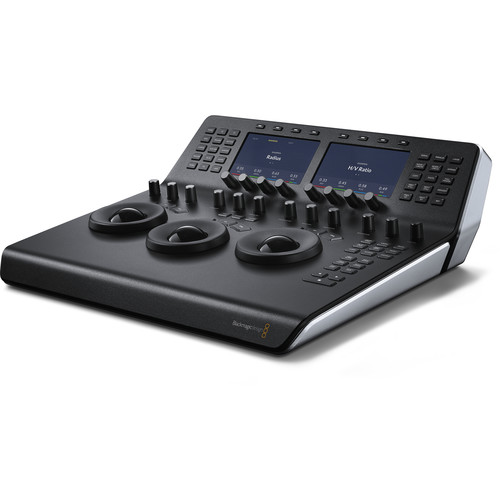 Blackmagic DaVinci Resolve Mini PanelThe DaVinci Resolve Mini Panel from Blackmagic Design is a step-up in functionality from the Micro panel but without all the features of the Advanced panel. It is a portable control surface suitable for those that need to switch between editing and color grading. It can sit on your desk top, in a rack, or be bolted to a surface. As with the Micro panel, it features three high-resolution, weighted trackballs and 12 control knobs for accessing essential primary color-correction tools in the Resolve software. 18 dedicated keys on the right side also give you access to the most commonly used grading features and playback controls.However, the Mini Panel also features two LCD screens that allow you to display menus or the parameters of the tools you are working with. Eight customizable soft knobs provide precise control and a quick reset by pushing the knob. Dedicated feature buttons allow you to change tools without needing to use the mouse. The Mini panel incorporates a USB Type-C and Ethernet interface. It is compatible with Mac, Windows, and select Linux systems. You can power the panel via an AC power source, a 4-pin XLR connector, or PoE. For the panel to work with Resolve, your computer must be running DaVinci Resolve 12.5.5 or DaVinci Resolve Studio 12.5.5 or later. An included USB 3.0 Type-A to USB Type-C cable provides backward compatibility for systems that are limited to USB Type-A connectors.Small enough to take with you, so you can bring it to any Resolve system (12.5.5 or later) and do color correction on location or at the editor's suiteShares basic layout with both Micro and Advanced PanelsInterfaces with and controls softwareThree track balls with outer control ringsLog and Offset color-correction selection buttonsButtons are backlit and light up when actuatedTwo LCD display screens for displaying the menu system or the parameters of the tools you are wotking withCustom control knobs with 4096 steps per rotation and push button resetPrimary Correction Creative Control KnobsControl knobs are grouped into four sets of three knobsLuminanceY Lift Control: Adjust the contrast of the image in the darker areas, specifically in the Y (luminance) channel only. This adjustment allows changing the black point without changing saturation.Y Gamma Control: Adjust the contrast of the image in the mid-tone areas, specifically in the Y (luminance) channel only. This control helps add depth and extra vibrancy to shotsY Gain: You can reduce hot spots or tweak the whites to define a look.ContrastContrast Control: Increase contrast to make the blacks darker and the whites brighter, or decrease contrast to do the opposite.Pivot: Change the center of tonality about which dark and bright parts of the image are stretched or narrowed during a contrast adjustment.Mid-Tone Detail: Affect the contrast of regions of the image with high edge detail to increase or decrease the perception of image sharpness and definition. Often used for softening facial features making it popular for beauty shots.DetailColor Boost Control: Raise the saturation in regions of the image with low saturation while leaving properly saturated areas alone. Also known as a vibrance operation, this is useful for adding color without over-saturating the image.Shadow Control: Selectively lighten or darken shadow detail without affecting your images mid-tones.Highlight Control: Enable retrieving blown-out highlight detail in high dynamic range media by lowering this parameter. This allows you to achieve a smooth blend between the retrieved highlights and unadjusted mid tones for a natural-looking image.SaturationIncreases or decreases overall image saturation ? you can turn your color image into a grayscale image with this control.Hue Control: Rotates all hues of the image around 360? of the color wheel. The default setting is 50, which retains the original distribution of hues.Luminance Mix Control: Controls the balance between the YRGB

Is WholesalePhoto.com site secure?
Absolutely. Your information is passed through our https site when you make a purchase. Your Credit Card is never stored on file.